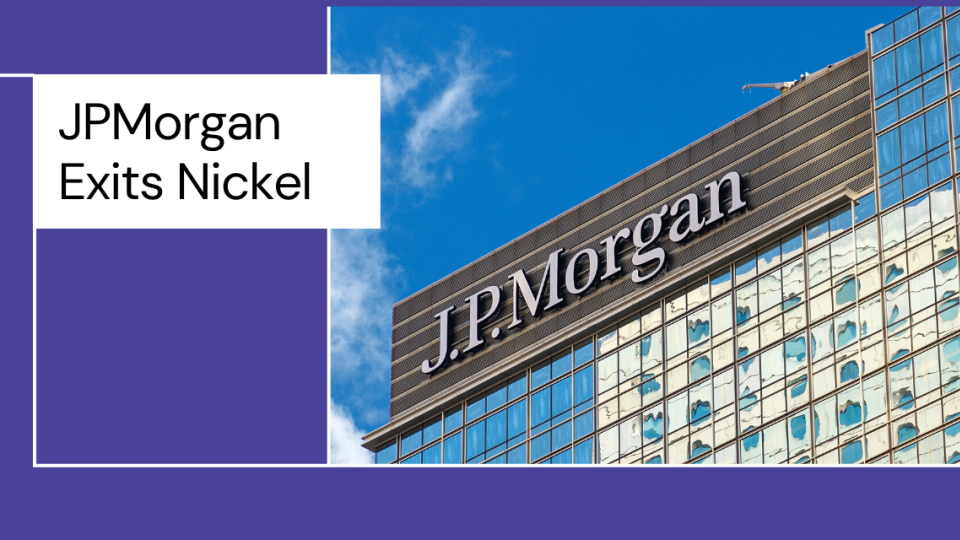 > US lenders had been Tsingshan’s largest counterparty in nickel.
>Bank took a $120 million loss on nickel in first-quarter results.

JPMorgan Chase & Co. no longer has any exposure to the nickel bet that rocked global metals markets earlier this year, after a drop in prices on the London Metal Exchange allowed the tycoon at the center of the squeeze to exit his positions with the bank.

JPMorgan emerged as a central player in the fallout from March’s nickel chaos because it was the largest counterparty to the massive short position held by Chinese entrepreneur Xiang Guangda’s Tsingshan Holding Group Co.

The US lender has had a close relationship for years with Tsingshan, and led the group of banks that agreed to backstop the company’s short position after prices spiked.

Tsingshan still has a short position in LME nickel, but it has been reduced to a fraction of its previous size and none of it is held through JPMorgan, according to people familiar with the matter, who asked not to be named as it’s not public.

Tsingshan’s final positions held through JPMorgan were closed out in the past few days, they said. That means JPMorgan has extracted itself from the saga, in which Tsingshan’s short position racked up mark-to-market losses of more than $10 billion dollars in just two days in early March.

A JPMorgan spokesman declined to comment. Multiple attempts to seek comments from Tsingshan were unsuccessful.

Tsingshan’s inability to pay its margin calls to its banks and brokers was among the main drivers of a 250% surge in prices in early March.

But the company got a reprieve after trading was suspended for a week, the transactions at the highest prices were canceled by the LME, and its banks -- led by JPMorgan -- agreed not to make further margin calls for a period of time.

Since then, nickel prices have drifted lower amid worries about the global economy, and Tsingshan has gradually reduced its position. It now has a short position of about 30,000 tons of nickel, the people said, down from a peak of more than 150,000 tons.

In its first-quarter results in April, JPMorgan reported a $120 million loss related to nickel, in the form of a credit valuation adjustment on its exposure to counterparties it didn’t name.

“We’re helping our clients get through this,” Chief Executive Officer Jamie Dimon said at the time. “We had a little bit of loss this quarter, we’re going to manage through it. We’ll do post-mortems on both what we think we did wrong and what the LME could do differently later.”

While the reduction in Xiang’s position means that the immediate crisis for Tsingshan and its lenders is largely over, the recriminations are only just beginning.

The Financial Conduct Authority and Bank of England are reviewing the LME’s actions during the squeeze, while hedge fund Elliott Investment Management and trading firm Jane Street this month launched legal action against the exchange. Source: Bloomberg