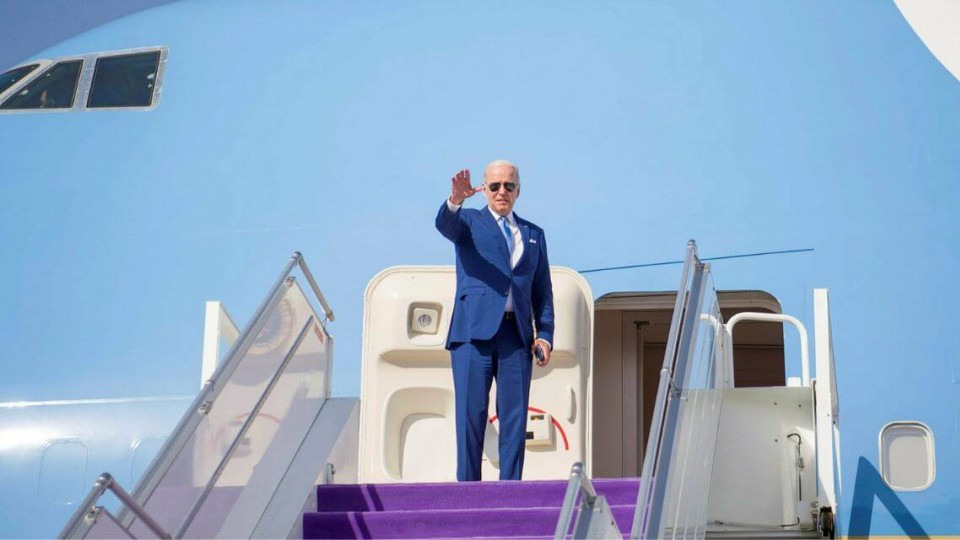 >The President attempts to reassure allies the US

President Joe Biden on Saturday capped a four-day trip to Israel and Saudi Arabia, his first trip to the Middle East since taking office

The President started his trip by meeting with Israeli leaders to expand security ties with the nation and discuss countering efforts by Iran to destabilize the region.

He next went to Jeddah, Saudi Arabia, where he attempted to reassure regional leaders -- and the rest of the world -- that his administration remains committed to actively engaging in the Middle East and not allowing Russia or China to expand their geopolitical influence.

On Friday, he sought a reset of relations with the Saudis as he looked for ways to lower high gas prices in the US, which have contributed to a significant drop in Biden's approval ratings.

That reset began with a widely criticized fist bump with Crown Prince Mohammed bin Salman, also known as MBS, whom the US has accused of sanctioning journalist Jamal Khashoggi's murder.

Biden said he raised Khashoggi's murder directly with the Crown Prince and indicated he believes MBS was responsible for it, as he emphasized the US commitment to human rights.

Here are five takeaways from the trip: Biden's fist bump with MBS signals a reset in US-Saudi relationship and draws fierce criticism

Ahead of his departure to the Middle East, administration officials had told CNN they were aiming for a full reset of the US-Saudi relationship after years of strain following Khashoggi's murder.

A fist bump in front of the cameras between Biden and the Crown Prince neatly symbolized that moment.

Biden said he was "straightforward and direct" with MBS, adding that he indicated to the Crown Prince that he believed he was responsible for Khashoggi's murder.

A day earlier, while in Israel, Biden had stopped short of confirming that he planned to raise Khashoggi's death with the Crown Prince, instead insisting that he "always" brought up human rights and that his views on the murder had been made "absolutely" clear.

The President reiterated that point on Friday.

"For an American president to be silent on the issue of human rights is inconsistent with who we are and who I am.

I'll always stand up for our values," Biden told reporters. On Saturday, as he was making remarks to the Gulf Cooperation Council, as well as leaders of Egypt, Iraq and Jordan, the President again touched on human rights as he sat beside Crown Prince.

Mohammed, called the values enshrined in the UN charter "foundational to who we are as Americans" and encouraged the assembled leaders to allow more rights for women and the press.

"I've got plenty of criticism over the years. It's not fun. But the ability to speak openly, exchange ideas freely, is what unlocks innovation," Biden said.

Biden came to Jeddah seeking solutions to one of his top political problems at home -- high gas prices -- as diplomacy with the kingdom and other allies in the Middle East was seen as one of the few routes he could take to ease the pain at the pump. But, the trip did not produce any immediate announcements on increased oil production.

The trip came amid high gas prices and widespread inflation in the US and across the globe, in part due to Russia's unprovoked invasion of Ukraine that has been ongoing since February.

The high gas and grocery prices in the US are putting stress on millions of Americans and represent a major political liability for Biden's Democratic Party in this year's midterm elections.

White House officials said in the lead-up to the Saudi leg of the trip that they did not expect to be leaving with promises of increased oil production, and that prediction came true by the time Biden left the kingdom on Saturday.

However, the President did strike an optimistic note that regional leaders would soon take action given that the next OPEC meeting will take place in early August.

"Based on our discussions today, I expect we'll see further steps in the coming weeks," Biden said Friday after hours of meetings with Saudi leadership.

Biden attempted to reassert US leadership in the Middle East during the GCC+3 summit Saturday with key leaders in the region and promised that his administration would stay actively engaged amid fears that China and Russia could swiftly fill a leadership vacuum.

The President's foreign policy focus since taking office has largely been on countering China's growing geopolitical influence and Russia's war in Ukraine, which has raised questions about the extent of Biden's commitment to engagement in the Middle East.

The summit came nearly one year after the US withdrew all military troops from Afghanistan and ended 20 years of war in the country.

Biden also noted that his visit to the Middle East was the first time since the September 11 terrorist attacks in 2001 that a US president had visited the region without American troops being engaged in combat in the area, though US forces continue to conduct operations in Syria.

Biden has been under pressure to do more to counter Iran in the region and come up with a coordinated strategy among allies, and on Saturday he made a commitment to the US playing a large role in the Middle East for years to come.

"Let me state clearly that the United States is going to remain an active and engaged partner in the Middle East," he said.

The White House released a joint statement later Saturday that said all the meeting's participants "affirmed their keenness to continue to hold the U.S.-GCC Summit annually."

Biden looks to diplomacy to block Iran from getting nuclear weapons despite Israeli skepticism During the first leg of his trip, to Israel

Biden repeatedly vowed to ensure that Iran does not acquire a nuclear weapon and said he believed diplomacy remained the best avenue to keep Tehran from obtaining one. His Israeli hosts were skeptical at best.

Biden has pushed for a revival of the Iran nuclear deal, which former President Donald Trump withdrew the US from in 2018, as he faces increasing pressure from key Middle East allies to produce a plan to contain Iran.

But hopes appear to be fading that a deal will materialize, and the President acknowledged that the US is "not going to wait forever" for a response from the Iranian leadership.

"I continue to believe that diplomacy is the best way to achieve this outcome," Biden said at a news conference Thursday.

"We will continue to work with Israel to counter other threats from Iran throughout the region, including support for terrorism and ballistic missile program that continues and the proliferation of weapons to terrorist and proxies like Hezbollah."

Standing alongside Biden at that news conference was Israeli Prime Minister Yair Lapid, who was dismissive about another nuclear deal as the means to prevent Iran from acquiring a nuclear weapon.
"Words will not stop them, Mr. President. Diplomacy will not stop them.

The only thing that will stop Iran is knowing that if they continue to develop their nuclear program, the free world will use force. The only way to stop them is to put a credible military threat on the table," Lapid said. Source: CNN