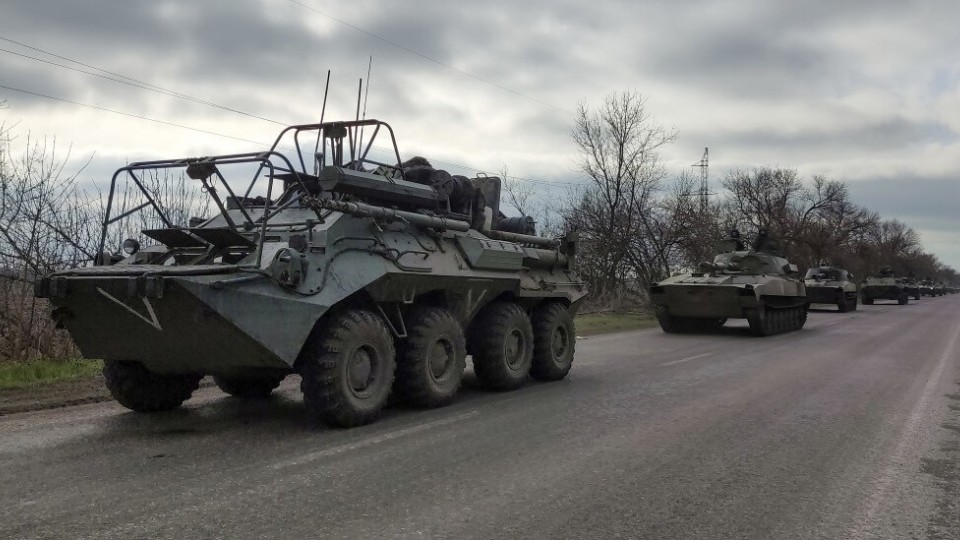 Russia has demanded Ukrainian forces still fighting to defend the besieged city of Mariupol lay down their weapons. The apparent ultimatum comes as Russia continues its relentless and devastating attack on the southeastern city.

Russian state media Ria reported that "without exception" all "Ukrainian armed units and foreign mercenaries" must exit from 6:00 a.m. to 1:00 p.m. Moscow time (same as local time) "without any weapons and ammunition," citing the Russian Defense Ministry.

An estimated 100,000 people remain in Mariupol and its immediate surroundings, which are reported to be largely under Russian control, with Ukrainian troops confined to pockets of resistance.

Some context: Ukrainian President Volodymyr Zekensky late Saturday called the situation in the besieged city of Mariupol "inhuman," saying the situation remained "as severe as possible."

"Russia is deliberately trying to destroy everyone who is there in Mariupol," he said in his latest video address.

The statement said "a Ukrainian military transport aircraft was shot down in the air" in the Odessa region while "delivering a large batch of weapons supplied to Ukraine by Western countries."

No further evidence was provided. CNN could not verify the claim and reached out to the Pentagon for comment.

Russia has claimed to have destroyed more Ukrainian military aircraft than were known to be in Ukraine's inventory, according to open-source information.

#3. Another Russian General Has Been Killed In Ukraine

Russian Major General Vladimir Frolov, deputy commander of the 8th Army, was buried Saturday after being killed in combat in Ukraine, Russian state media reported, which would make him the eighth Russian general killed in Moscow’s invasion, if Ukrainian claims are true.

As of the end of March, around 14 Russian generals and senior colonels had been claimed to be killed–a notable death toll likely to have disrupted Russia’s front-line operations. An unnamed Pentagon official said on March 25 that “it's not surprising to us to see that there are [Russian] generals on the battlefield” and vulnerable to Ukrainian fire. The official said Russians “don't delegate very well,” adding they “do not invest a lot of responsibility” in junior-level officers and “don't have a non-commissioned officer corps.”

Admiral Nikolai Yevmeno was shown in a short ministry video reviewing about 100 sailors, Reuters said. Russia claimed this week that the entire crew of the Moskva, which had a crew of about 500, survived the ship’s destruction.

Russia’s Black Sea flagship Moskva sank after it was struck by two Ukrainian Neptune missiles, the Pentagon now believes. Ukraine said earlier this week that it hit the Moskva with missiles; Russia then said that the ship was the victim of an ammunition explosion.

The Moskva was the Russians’ command vessel in the region and the primary ship for anti-air defense. A senior Defense official told NBC News that it’s unclear why the Moskva’s air defense systems didn’t work against Ukraine’s missiles.

Low-flying cruise missiles can be more difficult to spot on radar during stormy seas. The Russian defense ministry told Russia’s state-controlled media that the Moskva went down as it was being towed back to port “in a storm.”

Russia’s defense ministry said that the Moskva’s sailors will continue their service with the navy.

Akhmetov told Reuters he will one day return to a Ukrainian Mariupol to implement new production plans “so that Mariupol-produced steel can compete in global markets as before.”

More than a third of the country’s metal production capacity had been disabled due to Russia’s bombardment of Mariupol, according to Akhmetov’s Metinvest, Ukraine’s largest steelmaker.

Akhmetov said he has been in daily contact with the managers of the two steel works in Mariupol, and commended the brave soldiers [that] will defend the city.”

SCM Group, Akhmetov’s financial and industrial holding company and the country’s largest private employer, will “play a key role in the post-war reconstruction” of Ukraine, he said, adding that officials have estimated the damage in the country has reached about $1 trillion.

The billionaire told Forbes Ukraine last month he plans to remain in Ukraine and “will spare no expense or effort” to rebuild the country once Ukraine wins the war.

Mykhailo Podolyak, an adviser to Ukrainian President Volodymyr Zelensky, on Saturday urged European countries to expedite the transfer of weapons to Ukraine amid concerns over whether Ukrainian troops have sufficient arms and ammunition to fend off an expected offensive by Russian forces in eastern Ukraine in the coming days.

Podolyak tweeted that weapons from Europe are taking “too long to arrive,” and that Ukraine needs those weapons “now.”

A U.S. official told CNN there is growing concern over the prospect that Ukraine could lack ammunition to fight Russian troops, particularly artillery rounds, with heavy ground combat expected to take place in the coming days.

Strategic port city has been ​​completely cleared with a small group of holdout fighters on the outskirts told to ‘lay down their arms’, Russian defence ministry says.

Russia says its troops have cleared the urban area of the key city of Mariupol and only a small contingent of Ukrainian fighters remained inside a steel factory in the besieged southern port.

Russia’s claim to have all but taken control of Mariupol – the scene of the war’s heaviest fighting and worst humanitarian catastrophe – could not be independently verified.

It would be the first major city to have fallen to Russian forces since the February 24 invasion.

“The entire urban area of ​​Mariupol has been completely cleared … remnants of the Ukrainian group are currently completely blockaded on the territory of the Azovstal metallurgical plant,” said Igor Konashenkov, the Russian defence ministry’s chief spokesman.

“Their only chance to save their lives is to voluntarily lay down their arms and surrender.”

Konashenkov said 1,464 Ukrainian servicemen have already surrendered “in the course of liberation of Mariupol”.

The remaining fighters in Mariupol are blockaded in the Azovstal steelworks plant.

Russia’s defence ministry said if Ukrainian forces still fighting in Mariupol lay down their arms starting at 6am Moscow time (03:00 GMT) their lives will be spared.

“All who lay down their arms are guaranteed that their lives will be spared.”

Under the terms of deal proposed by Russia on Saturday, the remaining defenders in the Azovstal plant would leave between 6 am and 1pm Moscow time, without weapons or ammunition.

The start of the surrender would be indicated by raising flags, the ministry said: “From the Russian side – red; from the Ukrainian side – white, around the whole perimeter of Azovstal.”

Russia has banned entry to British Prime Minister Boris Johnson and several other top officials after the United Kingdom imposed sanctions on Russia over its military operation in Ukraine.

“This step was taken as a response to London’s unbridled information and political campaign aimed at isolating Russia internationally, creating conditions for restricting our country and strangling the domestic economy,” Russia’s Ministry of Foreign Affairs said in a statement on Saturday.

The ministry accused the UK government of “unprecedented hostile actions”, in particular referring to sanctions on Russia’s senior officials.

“The British leadership is deliberately aggravating the situation surrounding Ukraine, pumping the Kyiv regime with lethal weapons and coordinating similar efforts on the behalf of NATO,” the ministry said.

Shaun Pinner, a former soldier in Britain’s Royal Anglian Regiment, looked visibly tired and appeared to be reading from a page or a teleprompter as he said he had been serving along Ukrainian marines.

The 24-second video, posted by a journalist for Russian state TV, ends with Mr Pinner saying he has been captured and is now in Donetsk, the Ukrainian separatists’ stronghold.

Looking clean-shaven with no visible wounds, he said on the broadcast: 'I am Shaun Pinner. I am a citizen of the United Kingdom. I was captured in Mariupol.

'I am part of 36th brigade, 1st Battalion Ukrainian Marine. I was fighting in Mariupol for five to six weeks and now I am in the Donetsk People's Republic.'

His capture comes after Russia seized 28-year-old former care worker Aiden Aslin on Tuesday. He had also been fighting in Ukraine in the same trenches outside Mariupol as Pinner.

#10. Russian general buried in St Petersburg after he was killed in Mariupol

The governor of St Petersburg has said that Major General Vladimir Frolov has been buried on Saturday. The Russian army general was leading the eighth army, which had been fighting in Mariupol for weeks.

He reportedly died in the battle and Governor Alexander Beglov said General Frolov "died a heroic death in battle".

The governor didn't say where or when he was killed. He is thought to be the eighth Russian general to have died during the war.