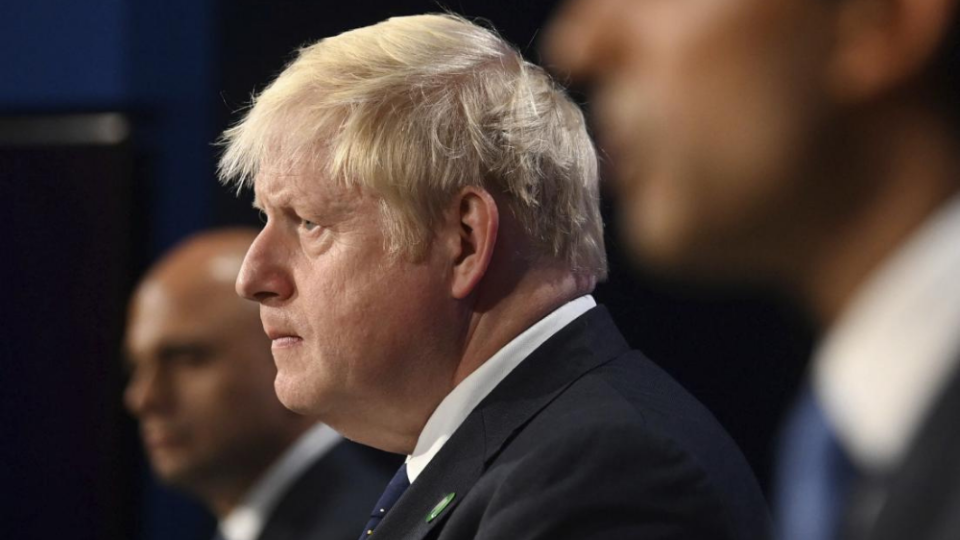 Boris Johnson resigns not over policies

"Of course, it is painful to not to be able to see through so many ideas and projects," Johnson said in front of the door of No. 10 Downing St. in London, as loud crowds could be heard nearby.

British Prime Minister Boris Johnson has finally resigned under heavy pressure from lawmakers in his own party.

His resignation caps a remarkable political career filled with highs, lows and almost too many scandals to count.

He said he will stay in office until the Conservatives choose a new party leader, who will then take over as prime minister.

"Of course, it is painful not to be able to see through so many ideas and projects," Johnson said in front of the door of No. 10 Downing St. in London, as loud crowds could be heard nearby. "But as we have seen at Westminster, the herd instinct is powerful and when the herd moves, it moves."

This comes after dozens of officials, aides and members of his Cabinet quit his government, saying they could no longer serve under his leadership. Several former Cabinet ministers told him he should resign.

An announcement will come next week about the timetable for choosing the new prime minister, Johnson said.

He also led the Tories to a historic landslide election in 2019, leaving the party with an 80-seat majority in the House of Commons. It was the largest victory since Prime Minister Margaret Thatcher's win in 1987.

Johnson, however, was ultimately forced to resign not over policy or political differences, but because of perceptions about his character.

Many Conservative lawmakers as well many members of the public do not trust him. A poll last month by the research firm YouGov found nearly 3 in 4 Britons viewed Johnson as untrustworthy.

The same pollster found this week that 69% believe Johnson should resign.

The scandal that ultimately ended his nearly three-year premiership was triggered by his decision to promote a lawmaker, Chris Pincher, to a position of power even though Johnson knew Pincher had been the subject of a sexual harassment complaint.

Initially, the prime minister's office said Johnson had not known about any specific allegations. On Monday, after more allegations emerged against the lawmaker, Johnson was forced to acknowledge that he had.

Dominic Cummings, Johnson's former chief adviser with whom he has had a bitter falling out, said Johnson had referred to the lawmaker as "Pincher by name, pincher by nature."

Johnson did not deny he used that phrase and apologized for appointing Pincher.

Pincher resigned last week as deputy chief whip in the House of Commons over the scandal. Johnson suspended him from the party, meaning Pincher could not sit with fellow Conservatives in Parliament.

On its own, the scandal would not have been a resignation matter for the prime minister. But some of Johnson's own Cabinet members saw it as part of a long-standing pattern.

During the COVID-19 pandemic, Johnson had insisted that his staff had followed all the government's own social distancing rules.

Later, it emerged that his staff had held a series of parties that included people getting drunk and spilling red wine on walls.

Meanwhile, most Britons followed the government's regulations and some were even unable to say goodbye to dying loved ones. Many here were furious with Johnson and his staff.

Johnson's Cabinet ministers tired of defending the prime minister to the news media only to learn later they'd been given false information.

"Treading a tightrope between loyalty and integrity has become impossible in recent months," said David Javid, the United Kingdom's former health secretary, in his resignation speech Wednesday in the House of Commons.

"Now this week, again, we have reason to question the truth and integrity of what we've all been told. And at some point, we have to conclude that enough is enough."

During Wednesday's session of Prime Minister's Questions, Labour leader Keir Starmer said the U.K. could not afford to rely on Johnson as it continued to grapple with major issues, such as the war in Ukraine and record inflation at home.

Staring at Johnson's Cabinet across the House of Commons, Starmer mockingly referred to their staying power as "the charge of a lightweight brigade." It was a reference to the Charge of the Light Brigade, a famous, failed British cavalry attack during the Crimean War.

"Have some self-respect!" Starmer told Johnson's cabinet members. "Anyone with anything about them would be long gone from his front bench in the middle of a crisis. Doesn't the country deserve better than a Z-list cast of nodding dogs?"

The Conservative Party's decision to press Johnson to resign was also a political calculation. Johnson rose to power in 2019 in large part because the party saw him as a winner.

After all, as a Conservative, Johnson had won two terms as mayor of liberal, cosmopolitan London. He was also a crucial force behind the 2016 campaign to leave the European Union, which led to an upset victory and changed the course of British history.

But last month, the Conservatives lost two parliamentary seats in special elections, leading many to think Johnson no longer had the electoral touch that had made him so valuable to the party.

Johnson, 58, trod an unconventional path to political power. He did not work his way up through local government, but came to fame as a celebrity journalist.

He made his name as a newspaper columnist and appearing on Have I Got News For You, a comedic, current affairs TV show on the BBC.

Questions of integrity have dogged him throughout his career. The Times of London fired Johnson in 1988 for making up quotes he attributed to his own godfather.

Johnson won election to Parliament in 2001. But in 2004, the Conservative Party sacked him from its leadership for lying about an affair. Source: NPR