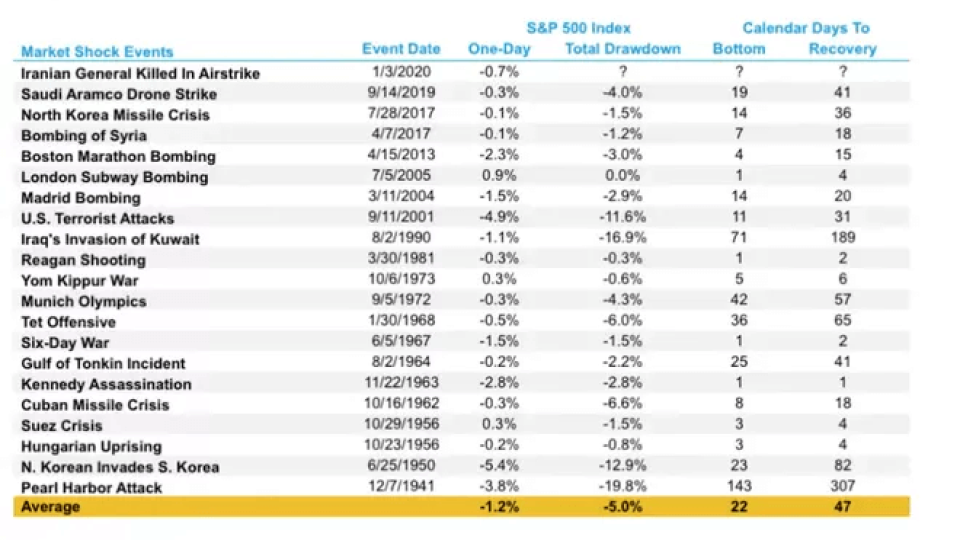 How the Modern Stock Market is Affected by War

A look at investor attitudes to war and uncertainty in the modern era. 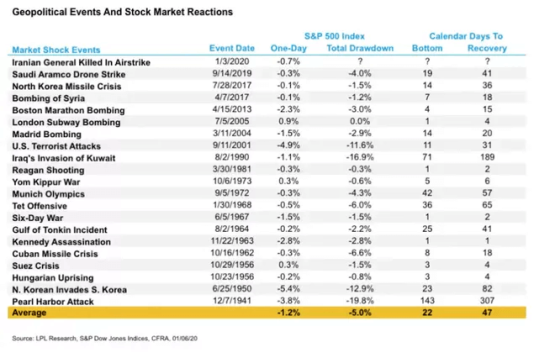 Lately, Russia has been saber-rattling and building up its military presence on its border with Ukraine, a sign that Putin may soon invade--and drawing the U.S. and NATO into war. There is also the ongoing possibility of an armed conflict between the U.S., its allies, and Iran.

So far the U.S. has spent an estimated $6.4 trillion on wars post 9/11, a sizeable piece of the GDP.1 But how do wars affect the economy and stock markets? Security experts are weighing in, and only time will tell, but investing experts are sending out reminders that past wars didn't push U.S. equities lower long-term.

Markets Often Shrug it Off

LPL Financial research notes that stocks have largely shrugged off past geopolitical conflicts. "As serious as this escalation is, previous experiences have indicated it may be unlikely to have a material impact on U.S. economic fundamentals or corporate profits," said LPL Financial Chief Investment Strategist John Lynch, referring to the January 2020 U.S. airstrike that killed Iranian general Qasem Soleimani. "We would not be sellers of stocks into weakness related to this event, given stocks have weathered heightened geopolitical tensions in the past."

"From the start of WWII in 1939 until it ended in late 1945, the Dow was up a total of 50%, more than 7% per year. So, during two of the worst wars in modern history, the U.S. stock market was up a combined 115%," wrote Ben Carlson, Director of Institutional Asset Management at Ritholtz Wealth Management, in an article about counterintuitive market outcomes. "The relationship between geopolitical crises and market outcomes isn't as simple as it seems."3

When Markets Can Suffer

History tells us periods of uncertainty like we're seeing now are usually when stocks suffer the most. In 2015, researchers at the Swiss Finance Institute looked at U.S. military conflicts after World War II and found that in cases when there is a pre-war phase, an increase in the war likelihood tends to decrease stock prices, but the ultimate outbreak of a war increases them. However, in cases when a war starts as a surprise, the outbreak of a war decreases stock prices. They called this phenomenon "the war puzzle" and said there is no clear explanation why stocks increase significantly once war breaks out after a prelude.4

Similarly, Mark Armbruster, the president of Armbruster Capital Management, studied the period from 1926 through July 2013 and found that stock market volatility was actually lower during periods of war. "Intuitively, one would expect the uncertainty of the geopolitical environment to spill over into the stock market. However, that has not been the case, except during the Gulf War when volatility was roughly in line with the historical average," he said.5 In terms of the Iran conflict, however, investors have had a muted reaction to the headlines. "If 2019 taught us anything, it’s that you have to try as best as possible to keep to your process and not get caught up in the headlines," said Strategas technical analyst Todd Sohn to The Washington Post. "In a sad way, I wonder if we’ve become used to it. I wonder if the market has learned to discount these events."6

"Part of the reason for the calm may lie in the changing structure of global oil markets and how the U.S. economy has become less vulnerable to energy price swings," said JPMorgan Funds chief global strategist David Kelly in a note. "Part of the reason may be purely psychological. Today’s investors have seen the stock market recover from both 9/11 and the Great Financial Crisis, arguably the greatest geopolitical and economic shocks of our time. This makes it easier for investors to shrug off other events."6

A conflict with Russia can also cause volatile oil markets, as Russia is a key producer of crude oil and natural gas, with pipelines feeding many parts of Europe. If Russia were to shut off the spigot, or have its oil infrastructure damaged, it could lead to higher energy prices. Interruptions to the ports around the Black and Baltic Seas could also create even bigger shipping headaches and lead to food inflation as grains and other staples remain stuck at sea.7

"Over the last few years, markets have been conditioned not to overreact to political and geopolitical shocks for two reasons: first, the belief that there would be no significant subsequent intensification of the initial shock; and second, that central banks stood ready and able to repress financial volatility," said Mohamed Aly El-Erian, the chief economic adviser at Allianz, in a Bloomberg column.8

But he warned that investors buying the dip should use a selective overall strategy. "This includes emphasizing up-in-quality trades that are anchored by robust balance sheets and high cash-flow generation, resisting the strong temptation for large-scale shifts away from U.S. assets in favor of international investments, and reducing exposure to inherently less-liquid market segments that have experienced beneficial spillovers from extraordinary central bank stimulus and the general reach for yield and returns," he said.8