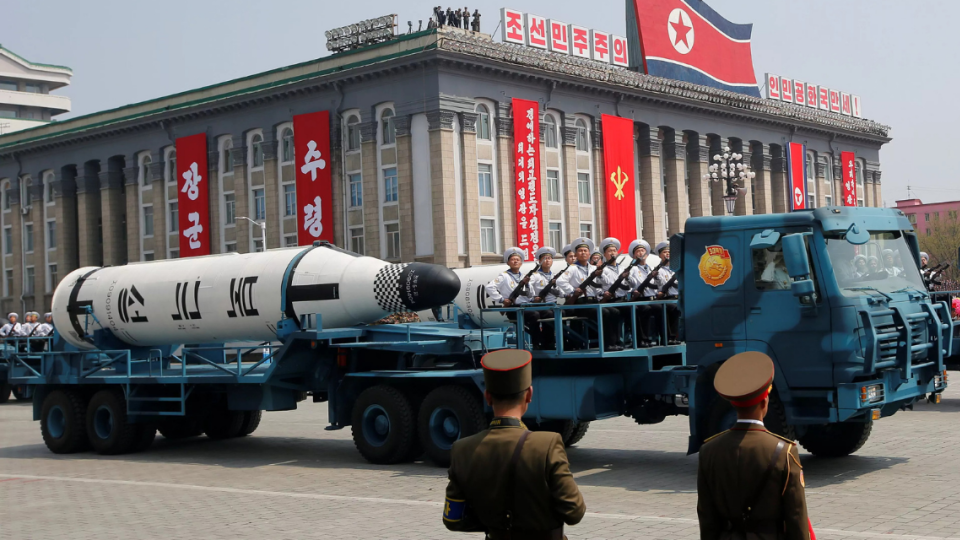 North Korea unleashes barrage of missiles in response to US

North Korea launched multiple ballistic missiles into waters off its east coast on Sunday, South Korea’s military said, a day after Seoul and Washington completed their first joint drills involving a US aircraft carrier in more than four years.

Pyongyang has doubled down on upgrading its weapons program this year, despite facing crippling economic sanctions.

“Our military detected eight short-range ballistic missiles fired from the Sunan area in Pyongyang, North Korea into the East Sea,” Seoul’s Joint Chiefs of Staff said, referring to the Sea of Japan.

The launches took place over about 30 minutes on Sunday morning, it added.

“While our military has strengthened surveillance and vigilance in preparation for additional launches, South Korea and the United States are closely cooperating and maintaining a full readiness posture.”

“We can say the very large number of launches from at least three locations in a short period of time like this time is unusual,” Japanese Defence Minister Nobuo Kishi said, confirming the North fired at least six missiles. “This is absolutely unacceptable,” he added.

Pyongyang has long protested against the joint exercises, calling them rehearsals for invasion. “The exercise consolidated the two countries’ determination to sternly respond to any North Korean provocations while demonstrating the US commitment to provide extended deterrence,” the Joint Chiefs of Staff said in a statement.

Go Myong-hyun, a researcher at the Asan Institute for Policy Studies, said Sunday’s launch was likely a response to the US-South Korea manoeuvres. “It seems that they fired eight missiles because the scale of the joint drills has expanded in their view,” he said.

Last month, during a summit with Yoon, US President Joe Biden said Washington would deploy “strategic assets” if necessary as part of efforts to bolster deterrence.

US and South Korean officials have warned for weeks that Pyongyang may conduct a seventh nuclear test. Despite struggling with a recent Covid-19 outbreak, North Korea has resumed construction on a long-dormant nuclear reactor, new satellite imagery has indicated.

South Korea’s presidential office said last month that Pyongyang had carried out tests of a nuclear detonation device in preparation for its first nuclear test since 2017.

Long-range and nuclear tests have been paused since North Korean leader Kim Jong-un met then US president Donald Trump for a bout of high-profile negotiations that collapsed in 2019.

But Pyongyang has since abandoned this self-imposed moratorium, carrying out a blitz of sanctions-busting weapons tests this year, including firing an intercontinental ballistic missile (ICBM) at full range.