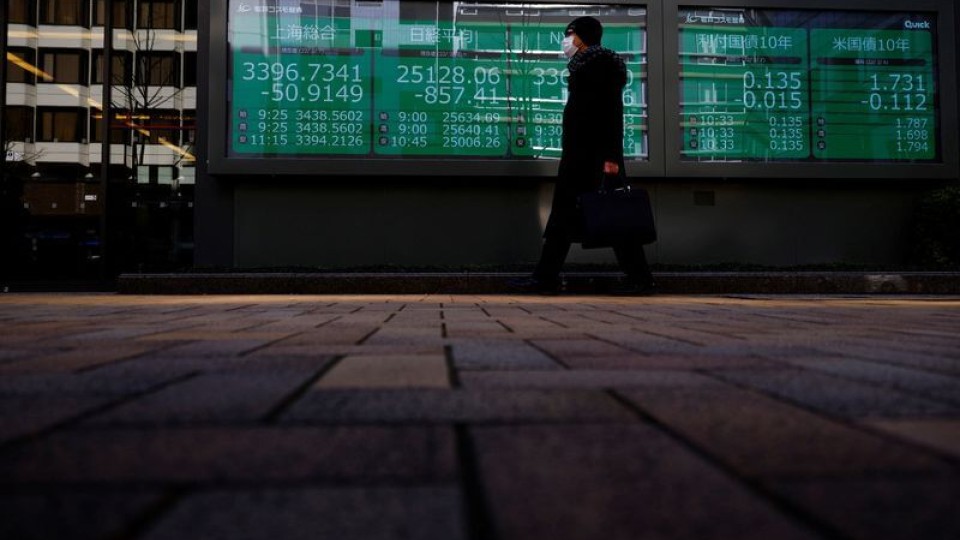 Shares gain as oil slips on hopes for Ukraine progress

Most share markets firmed and oil slid on Monday on hopes for progress in Russian-Ukraine peace talks even as fighting continued to rage, while bond markets braced for rate rises in the United States and UK this week.

While Russian missiles hit a large Ukrainian base near the border with Poland on Sunday, both sides gave their most upbeat assessment yet of prospects for talks.

Tokyo's Nikkei rose 0.9%, but MSCI's broadest index of Asia-Pacific shares outside Japan was dragged down 1.6% by losses in China.

Chinese blue chips shed 1.7% after a jump in coronavirus cases saw the southern city of Shenzen locked down and stoked speculation about more policy easing.

Notably, a key measure of U.S. inflation expectations climbed to 3% and near record highs.

That merely cemented expectations the Federal Reserve would lift rates by 25 basis points at its policy meeting this week and signal more to come through members' "dot plot" forecasts.

"The dots will likely be mainly clustered around four or five hikes for 2022, up from three previously, given the stronger pace of inflation since the January FOMC meeting," said Kevin Cummins (NYSE:CMI), chief U.S. economist at NatWest Markets.

"We suspect we could also get an addendum on how the Fed plans to reduce the size of the balance sheet as early as this week."

The Bank of England is expected to lift its rates to 0.75% on Thursday, the third rise in a row, and to signal more with the market pricing an aggressive 2% by year-end.

Fed fund futures imply no less than six or seven hikes this year to around 1.75%, keeping the U.S. dollar underpinned near the highest since May 2020.

The Bank of Japan is seen lagging far behind
other major central banks in tightening policy.

"The yen has been unable to display its typical safe-haven attributes, partly because of the big rise in U.S. yields and the BoJ yield curve control policy that prevents JGBs following the move up in core global yields," said Rodrigo Catril, a senior FX strategist at NAB.

"Japan is also a big energy importer adding to concerns over a terms of trade shock from higher energy prices."

Likewise, the chance of progress on Ukraine saw oil prices surrender a little of their recent gains, even as talks with producer Iran seemed to be stalled.